When we were starting this new line of products, we asked ourselves

We tended to offer high-quality UV Protection Shirts, highly thought-of swim shirts products, but instead of simply continuing what we usually do, we decided to take a different approach—see our products from our customers’ point of view without sacrificing what we stand for. So, we also asked—”What do our customers really want?”

Our growing loyal consumer base likes Blood Red’s designs mainly because they are unique & attractive, they fit well and are comfortable, and are highly functional. So, the idea was to make “relatable” designs while retaining the functional characteristics of the products. Thus, the challenge began, and building up designs for our upcoming collection was not easy. The team had a lot of factors to consider, and a lot of sketching was then in order. Fit and function were still on top of the priority list for our high-performance swimwear, and a lot of limiting factors challenged us in the aesthetics department. How we executed the functional aspects of the products mattered, since these may technically not be the first thing customers see, but literally something they would notice once they try an item on.

Concept-wise, the design story of our 2018 Collection took inspiration from the Seven Seas – Pirates, Buccaneers, treasures, discovered islands, celestial bodies, sea explorers, adventure and life at the sea. This was a point in time when unknown places, islands, and even countries were about to be discovered. Kings and queens sent out explorers and privateers who spent big chunks of their lives at sea, as well as pirates and buccaneers who stayed ever so long in the seas and oceans. We were enthralled by the concept of life at sea by these explorers—their choice of colours, their habits, their lifestyles, and their adventures. Our motivation was to create designs in the most simplistic approach while retaining a Blood Red life-at-sea feel.

As our collection sketches began to develop, we decided to break it up into 6 sub-collections: Lunar, Paradise, Breton Stripes, Lost Treasures, Red Tide, and Outcast. This way, we could offer a wide range of designs and choices while expanding thseven-seas-collection-nocturne-mens-rash-guard-1000×667.jpg scope of the theme for our top women’s rash guards, men’s sun-guards, kid’s swimwear and more. Record-wise, black and dark colours always sell, and starting a series based on these colours was the easiest case. We played with the combination of black and white with the addition of racing line stripes. It slowly took form and naturally blended with our theme, the Seven Seas – inspired by how the sailors and pirates relied on the celestial bodies that were visible at night – the moon or Luna for light, and the stars as navigation points. A slightly relaxed fit (for men) and sporty collection in black and white, we called it the Lunar Collection. We wanted to create something that exudes timelessness and relaxation for our sun protective clothing—with a nautical feel or associated with the sea. Stripes had been always associated with sailing, so at first, we wanted to create a bold collection using varied pop coloured stripes. It was slowly going to frustration as we couldn’t figure out what combination of stripes would work. But before we hit rock bottom, we figured out that we are pushing ourselves too hard, and we needed to go back to where it all began. Blue and white stripes have long been associated with navies, sailing, navigation and summer holidays. Tracing its roots to the most classic of them all, Breton stripes were used way back in the 17th century and declared part of the official uniform of the French royal navy. Applied to modern cuts with a flavour of luxury and relation, the classic Breton Stripes became the key element for this sub-collection which carries the same name.

Seven Seas also explores naval themes, pirate wars, and struggles for navigational superiority. In particular, the Lost Treasures collection is inspired by the colours of naval and maritime forces, and the uniforms of high ranking naval officers. Unlike those at the front lines, these guys had a more luxurious way of living, and enjoyed good standing in society, who lived gilded lives. We wanted to design something that looks luxurious yet active and sporty at the same time, and we want our consumers to feel and experience this in our Lost Treasures collection. 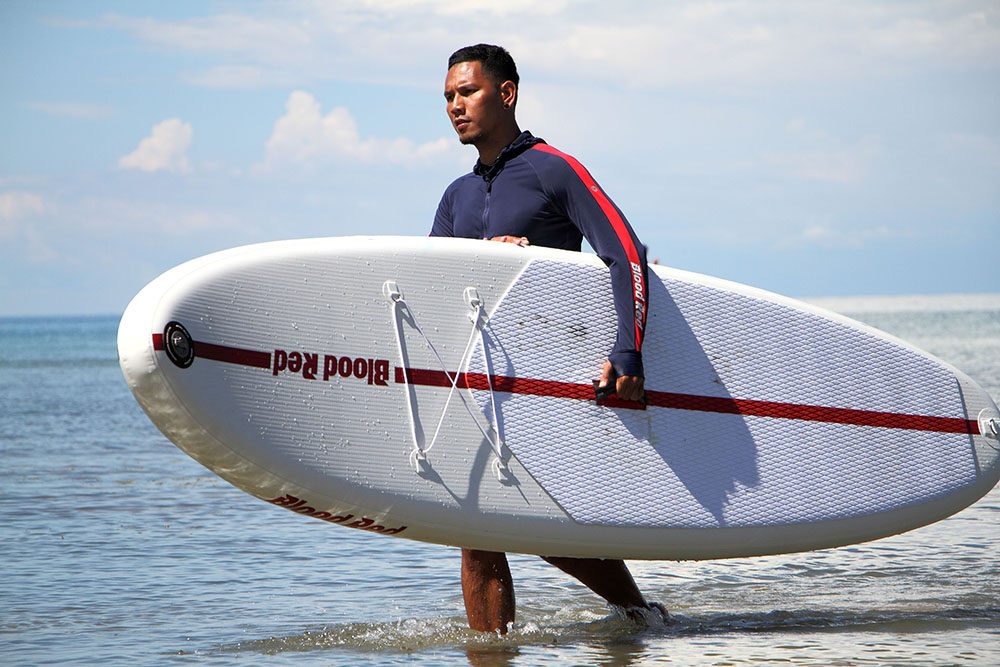 The Red Tide collection was inspired by how active, well-planned yet risky movements were at sea, and how they faced the uncertainties. The colour of the collection was inspired by how notorious pirate captains were often depicted wearing red or crimson red. As a water sport apparel line, a sporty feel is often incorporated into our selections, while dynamic cuts and bright sports colours are present in this year’s roster. The Red Tide collection can be used in many water sports activities (sailing, wakeboarding, surfing, etc.), and is also very good as event uniforms as they will stand-out on and off the water. In pirate or naval groups, there will always be an outcast of the group. These are most likely the rebellious, noisy ones. Pirates are generally rebellious – doesn’t want to follow what has been imposed, doesn’t go with the norm, making them outcasts of society. We wanted to shine upon this matter in a positive way, this being different from others – confident and not afraid to stand out…sometimes even bordering arrogance. This fuelled our imagination and created the last set of the Seven Seas inspired collection, the Outcast. By venturing on bright colours and daring colour match ups, we created a beach collection where you can stand out.